I slept till noon today 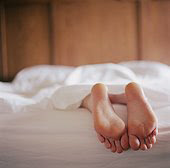 Couldn't believe it when I woke up and saw the clock - 12:05?? I can't remember the last time I slept past 10 (which is a rarity), never mind noon! All of the people that have to get up with an alarm everyday probably hate me right now - sorry.
I used to be an insomniac. I don't think I slept more than 2 - 3 hours a night from around1991 - When I met Wayne. The first time we spent the night together, I slept like a baby and I've had very few sleepless nights since. Lately, I haven't been lying awake at night, but I have had a lot on my mind and it was taking longer and longer to get to sleep.
There have been a lot of things on my mind - I'm feeling somewhat homesick. I say 'somewhat' because it's mostly just my friends I miss. Nicole (my best friend) more than anyone and I don't know when we'll be able to make it back next. I also have a bunch of family issues on my mind as well, along with various other things that are associated with living here (things I won't get into). But that hasn't been all...
Wayne has known something wasn't right with me. I kept saying, 'I just don't know what it is; I just feel unbalanced'. We'd talk about what it was and it helped a lot, but I really couldn't get to the root of what was wrong. How do you get to the root of it, when it's been the past that's been bothering you more than anything? We can't change the past. I think it was listening to that damned radio station that I wrote about over the weekend. It's amazing how music can be such a powerful thing. I've had all my past relationships floating around in my head. Good, bad and indifferent describes it the best - 'Good' being my first love, 'bad' being Roger (the one that I refer to as the bad ex throughout my blog) and 'indifferent' would be my ex husband (My high school sweetheart is mixed in there somewhere, but I don't think about him all that much). There has been one person in particular that's had me off balance. Yesterday, something happened that put everything back in it's place and judging by how I slept last night, I'm feeling much better. Sure I still have the same stuff on my mind, but now I just have a bit more peace of mind.

Mindy said…
Those feet look abnormally big for a girl of your size :) they're not your's are they? lol
Min
4:23 PM