I have two cats. Alfie, and Luka. They are brothers. They're full breed Tonkanese. I could have had any old cat, but mt stylish husband had to have beauty and style and that's what we got. Before Ethan, they were my babies and my only companions in this country.
Alfie is an ultra sweet, super affectionate pain in the ass. He's verbal as hell. He walks around the house following me around like a puppy dog. He annoys the heck out of me, but I love him dearly. His only crime is he loves me too much. 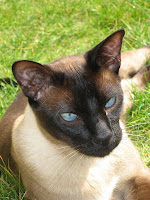 Luka is beautiful. I adore him. He's gentle soul. He's quiet and sweet, but he's not the sharpest tool in the shed. He's unbelievably skiddish. So much that his claws are permanently out; he doesn't know how to retract them so when he walks you hear his claws hit the floor with his little foot steps. The trouble with that is if he's lying on me when something spooks him, blood is drawn!
Anyway, the first night my flu started, Luka went missing. My cats go out during the day, but come home for dinner and are kept in for the night due to foxes in the area. Luka didn't come home when I called for dinner. After putting Ethan to bed, I went and looked for him. Usually if he gets himself into trouble, I walk around and call him. He meows back to me until I find him. I called and looked for hours that night. Wayne and I took turns, but we both know he's only answer my calls. I found a few foxes, but no Luka. In the end, I was a crying mess. I hated going to bed without having him safe at home. I clung to Wayne and cried myself to sleep.
We were woken that night by the unmistakable, horrible sounds of a cat being attached outside (the kind of sound you only hear in the movies). Wayne sprung out of bed and ran for the door, but I was the first to get dressed and left Wayne standing at the door (handing him his trousers on my way out). I took a flashlight and headed for where the sounds were coming from. On the next street over, I saw a large fox standing over something on the ground. I called out and he jumped onto an 8 foot fence where he stood looking down on me. We starred each other down - eyes locked and neither of us moving. I thought I can try to get to what ever he had on the ground, but what if he goes for me(it was a wild animal)?? What if I find Luka dead in a bloody mess?? I got scared and (not in my finest moment) I ran. I ran to my husband crying that I was too scared. I heard the fence 2 more times before Wayne had a chance to make it over there. I knew the fox got what he had and took off.
When Wayne got back, we went to bed for a sleepless night with the sound of that poor cat ringing in our ears. By morning, I was a mess. I woke by 6AM and went straight for the front window. No Luka. I swore I heard him, but assumed it was my imagination.
I went down stairs and in desperation, opened the door hoping Luka would come tearing in - Nothing. I poked my head out and called for him with a pathetic call. That's when I heard him. I yelled for him and looked desperately for him. He called back to me with just as much desperation. That's when I saw him - in my neighbors 2nd floor window. He'd been trapped in their house all night. As early as it was, I knocked at their door as Luka stood at the window trembling and crying. No answer. They were sleeping. Not able to get to me, Luka started to panic. Afraid he'd jump, I had no choice than to go in the house and wait. After knocking every 20 minutes, they finally opened their door just before 9AM. I went in and saved my little cat and he went straight for the litter tray. That day he never left my side and I was happy to have him with me - Safe and sound.
I don't know how or why he ended up trapped in my neighbors house, but like I said - he's not the sharpest tool in the shed!

Chris said…
This was a great story! So well written!
6:27 PM

Anonymous said…
I'm all about books & cats! I used to have a Siamese (Charlie). I have done cat rescue for over 30 years. I have been a reader much longer *lol*.
I'm a new follower, and hope you will join me, too.
McGuffy's Reader
http://www.mcguffysreader.blogspot.com
11:09 PM

Crazy Life of a Writing Mom said…
Such cute cats! I loved reading this.

Erren said…
Thanks so much guys. I thought people might give up bored before the story got interesting. So glad you liked it!
McGuffy & Elisabeth - I will definitely check out your blogs. It's always great to have new followers!
11:15 PM