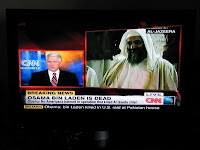 I woke up in such a bad mood. My husband was supposed to let me sleep in, but it didn't go my way. I went down to make coffee all annoyed and my husband called down to me to come up to the living room. I heard the Prime Minister's voice and thought, What on Earth is he calling me in to see (I'm usually very uninterested in British politics - posh accents put me to sleep). Annoyed and bitchy, walked in and said,'What??' he told me to look at the news ticker. I sat in disbelief and to my surprise, began to cry bittersweet tears. They got the f@cker! Bin Laden is dead! I was overcome with emotion. My only disappointment was that I didn't hear the news from my president in my country. I didn't get to celebrate with other Americans. All I could do was sit there and cry watching the footage of the Americans celebrating in the streets. I realized I would have been out there with them spontaneously celebrating that justice has finally been done. I felt enormously patriotic. I grabbed my phone & text the small group of Americans I know here in England and asked if they had seen the news yet so I had someone to rejoice with in the same way I was. Don't get me wrong, Wayne was great. He hugged me and sat there with me while I waited to see the president's speech I had missed while I slept, but he couldn't truly understand what I was feeling. I have never in my life been glad to hear of someone's death (I think I was the only one on earth to be disturbed by the sight of watching Saddam be lead to his death. To me, he looked like a pathetic old man. I wasn't sorry when he was dead, but I wasn't happy either), but today I was happy. Today, I hope there is a hell so that he burns for all eternity. Today is a good day for Americans. Today, we have some closure for that horrific day.

Anonymous said…
Erren,
Love the new pic! You look TINY! I'm glad you update them every once in a while. It keeps it current and real. I sometimes think I forget what you look like - you hot momma :-) Miss you, Chris
7:30 PM