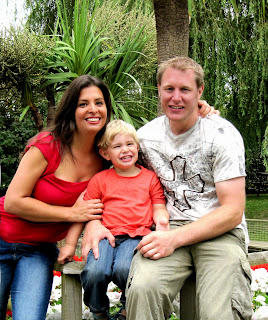 Yesterday, I felt awful in the morning, but forced myself out anyway and I'm so glad I did. We started with a trip to a place called Paradise Park which is a play park for kids. It has a small science center that teaches kids about dinosaurs (as well as other things), a large botanical garden, miniature golf, playgrounds & a train ride. It has two displays of huge dinosaur models that roar as you walk by. There's one outside & one inside that's dark and the dinosaurs move as well as roar. Ethan is terrified of it and screams every time we go anywhere near it. The outdoor one is near the gardens. He's never gone anywhere near that one either (despite his love of dinosaurs). Yesterday, he was brave and went into the outside display. I was so proud of him and he ended up walking through it 3 times even touching them as he went through. 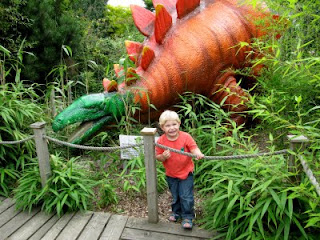 In the gift shop we bought one of those airplanes that flies by winding the propeller that's attached to a rubber band. On the way home we went to the cliffs to fly it. I got to take some really great pictures of the scenery and we had a really great time flying the plane with Ethan. 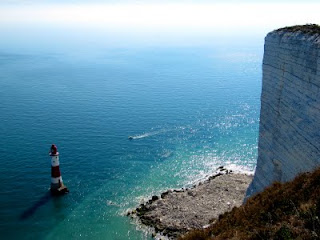 Later after we put Ethan to bed, my husband and I sat on our back deck that over looks the harbor (the photo is the view from the deck). We haven't had a great summer and don't get to sit out there very often, but it was a beautiful night so we had our dinner on the deck. 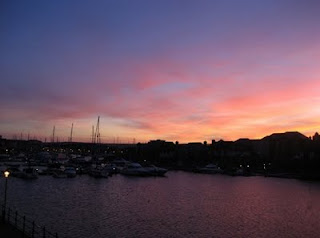 We ended up staying out there for the rest of the night. We drank (got quite tipsy), talked and laughed all night. It was so lovely to have such a great time just hanging out. We're so lucky we still enjoy each other like that. After nearly 8 years together, we still laugh like we did from the beginning. I had such a wonderful day (which was quite a contrast from the day I had on Friday)!