Seeing it through the eyes of a mother 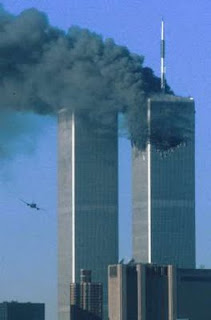 While seeing footage on TV this morning, I had to try to explain to my 3 year old son what happened on 9/11. I told him some buildings fell. He asked how. I told him that some very bad men knocked them down. He asked why and then asked, can I see? I started to cry and turned on Mickey Mouse instead.
I cried for 10 minutes thinking to myself, how do you explain to a 3 year old that such evil exists in the world? I was completely overwhelmed with the knowledge that one day, my very sensitive son (who cries when he sees children play fighting), is one day going to realize that the world he lives in is one that people get into airplanes and crash them into buildings. I hate that this will happen and there's nothing I can do to shield him from it or make him feel safe when that day comes.
It's occurred to me on that day, there were parents that had to change the channel so their children would not see the horrors that unfolded. Those parents would have had to be terrified by not knowing what was happening and like me (who had insomnia at the time and fell asleep at 6AM that morning and slept through the whole thing) would have been shocked and horrified when they later saw the footage on the news.
For me, sleep didn't come for weeks. I sat in front of my TV waiting for someone to be saved. I wanted so baldly for those rescue workers to get the chance to save just one, but that day didn't come. I can't imagine what it would have been like to be a parent at that time. To know that the world was not safe for their children and be so helpless in that knowledge. I had time to absorb it before becoming a mother and on days like today, it's still such a hard pill to swallow.

An Bình said…
This comment has been removed by the author.
5:01 AM