During our trip to the States, my three year old son became obsessed with a TV show called Dino Dan (which they don't play in the UK so I had to buy it on iTunes before we left so he'd be able to keep watching it). On the show, a ten year old boy sees computer animated dinosaurs everywhere he goes. Now, my son also sees dinosaurs everywhere he goes. He's constantly sayings things like, 'A T-Rex! Cool!'
This morning, he tried to climb up to a window in my bedroom which is on on the top floor of our three story house to look at a dinosaur he was sure was outside. In the UK, most windows open out (like a door) and have no screens or child safety latches to keep children from falling out. 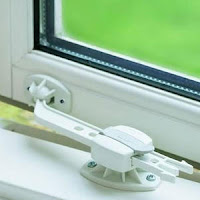 In his room (also on the top floor) and in the rooms on the 2nd floor, we have window guards to keep the window from opening too wide. We didn't put them in the master suite because he's never in there without supervision. He's older now and I know it will have to be done, but I digress...
He tried to climb up. I yelled at him to never do that again. He said he just wanted to see a dinosaur that made a noise outside. I told him that if he climbed up and fell out he could get very badly hurt. He told me, 'but if I did, I would get up and go inside through the door'. This terrified me. I said, 'No you wouldn't! You might get so badly hurt that you would go to sleep and never wake up because that's what happens when you die!' He calmly told me, 'Mommy, people don't die'. I wanted to cry. I couldn't tell him. I chickened out. I hugged him and said, 'OK Baby'. I closed the window, locked it and decided now is a good time to get those window guards.
I just couldn't tell him. I didn't want to take that innocence away. I knew telling him might scare him into not doing it again, but I also knew telling him would scare him in a much deeper way. I couldn't do it. He's only three. I don't know if I made the right decision or not, but for now, it was the only one I could make. Parenting is hard!