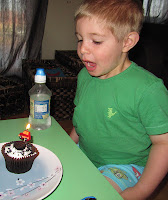 Ethan turned 4 last week.  I made it a week long celebration trying to make it as special as I could.  He was so excited about turning four.  Why should all the excitement be over after just one day?  His birthday as on Tuesday.  He wanted a dinosaur birthday so what better way to spend the day than at the Natural History Museum in London?  We started with birthday gifts first thing in the morning followed by breakfast which was finished off with a cupcake complete with a candle and singing happy birthday. He got dressed into his usual 'Dino Dan' uniform (Dino Dan is a TV show that Ethan is obsessed with. Dan only wears yellow shits and Khaki shorts or cargo pants so most of the time it's all my son will wear) and we were off.  We took the train into London which was a treat in its self. He told everyone he could on the train that he was going to see the dinosaurs.  It was wonderful to see him so excited. 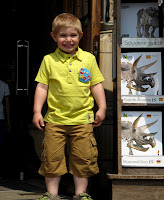 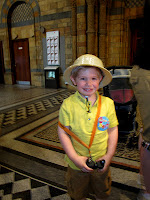 As soon as you walk into the museum there is a huge skeleton of a long necked dinosaur and he ran straight for it as my husband stopped to buy a map (knowing Ethan always needs a map for his adventures).  As soon as Ethan saw the skeleton he just looked up in awe and said 'It's a brachiosaurus!, Let's go!' and headed further into the museum.  I had to stop him before he ran off.  I told him that first we had to stop at the desk for his explorer pack.  The museum gives out back packs complete with explorer hat, adventure kit & binoculars. The kit included a task they needed to complete and clues.  He loved it! 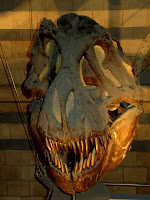 I have to say he was very quiet walking through the dinosaur exhibit.  I think he was a little scared as well as a bit awe stricken by the whole thing.  The exhibit is very dark and probably seems quite ominous for a little kid.  He did well, but lacked the WOWs I expected him to have.  He looked around  interested, but allot quieter than I ever expected he would be. 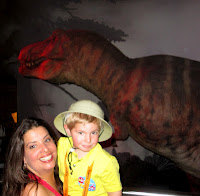 At the end of the exhibit there is a dark corner with no chance of an exit without going into a dark room that houses a huge animatronic T-Rex.  I thought it would scare the pants off the poor kid (we bring him to a local park that has one that moves and roars and he has never gotten the nerve up to go in.  He once begged them to turn it off so that he could go in without the roaring), but he was really brave and we even hung out in there for a while to film some video and took some photos.  We stayed at the museum the entire day and although I offered to, he never wanted to go back to see the dinosaurs before we left.
We got home late that night.  He slept in the next day and skipped nursery school to stay home & play with his new toys.  The following day they had a party at his nursery school for the Queen's Jubilee where they sang Happy Birthday to him so he thought the party was for him and then on Saturday he had his birthday party with all of his friends.  All in all it was a great week for him that I hope he won't soon forget.

Missy said…
Looks like he had a great day! He looks so excited! You can't help but smile along with him!
10:05 PM