How To Talk To a Widower By Jonathan Tropper 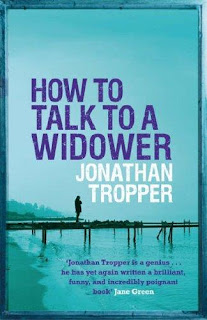 Synopsis:  When Doug Parker married Hailey - beautiful, smart and ten years older - he left his carefree Manhattan life behind to live with her and her teenage son, Russ, in the suburbs. Three years later, Hailey has been dead for a year, and Doug, a widower at 29, just wants to drown himself in self-pity and Jack Daniels. But his family has other ideas... Russ is furious with Doug for not adopting him after Hailey died, and has fallen in with a bad crowd. Claire, Doug's irrepressible and pregnant twin sister, has just left her husband and moved in, uninvited, determined to turn his life around. Then there's Debbie, their younger sister, engaged to Doug's ex-best friend and maniacally determined to pull of the perfect wedding at any cost. Soon, Doug finds himself trying to forge a relationship with Russ, reconnecting with his own eccentric nuclear family, and reluctantly dipping his toes into the shark-infested waters of the second-time-around dating scene. It isn't long before his new life is spinning hopelessly out of control...
My Thoughts: Johnathan Tropper is by far my favortie author and I think this is my favorite book of his that I have read (I've read them all except for Plan B).  Johnathan Tropper has a gift of writting that brings you on an emotional roller-coaster.  While reading this book, I found myself reading through my tears and then on the very same page, laughing out loud. This book was beautifully written and he is pitch perfect in his ability to convey the most intricate emotions of his characters which just leap off the page. It is insightful, poignant and wonderfuly funny.  I just loved it!