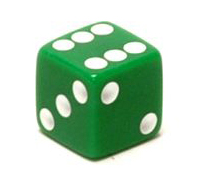 Yesterday on the way home from picking Ethan up from school, I found a little green die in his book bag.  I took it out, showed it to him, and asked him where he got it.  He said, ‘I got it at school.  I liked it and wanted to take it home.’ I said, ‘But it’s not yours to take, Sweetheart.’  He looked worried.  I explained that its wrong to take things that aren’t yours.  Telling him, ‘Its called stealing and stealing is wrong.  You’re not in trouble this time, but if it happens again, you’ll be in big trouble’.  He said he was sorry, I told him it was okay, but he’d have to give it back in the morning and explain to Daddy what happened when he got home (just to reinforce that it wasn’t a good thing to do).  He asked if he could play with it when he got home, and as much as I wanted to let him, I said no.
That night, I had him tell his Dad what happened.  He explained that he liked it and wanted to keep it so he put it in his bag to take home.  He asked me to get it so he could show my husband.  I got it out of his bag and as I took it to him, I couldn’t help but find his fascination with this tiny item, precious and I just wanted to hug him and let him keep it.  He showed it to his dad and again asked if he could play with it.  My husband said no, reinforced that it’s wrong to take things that aren’t yours and told him it wasn’t his to play with.  The disappointment on his little face nearly broke my heart.
This morning, I took him to his teacher and had him give it back.  She asked, ‘Did you take this home by accident?’  I said no, he did it on purpose and he shouldn’t have.  Then, I thought better of it.  I realized what she was doing and quickly corrected myself saying, ‘Well since he didn’t know it was wrong I guess it was by accident, but he promised he wouldn’t do it again’.  She thanked him for his honestly and told him that today, he was going to be the ‘Wise Old Owl’ for the day.  She told him he was such a good boy yesterday and made such a good decision to return the die, he earned the title.
My son has come home every day from school telling me how much he wished he could be the ‘Wise Old Owl’.  It’s an honor given to the child who behaves the best or improves the most that day.  He kept telling me, ‘I’m just never good enough, Mommy!’  I kept telling him, ‘I’m sure everyone gets a chance, Baby.  You’ll get yours.’ He would say, ‘I’ve tried so hard.’  When he got the news that he would finally get to be the Wise Old Owl, (2 weeks is a lifetime for a child and he’s waited 2 whole weeks), his face lit up like I’ve never seen it before!  My heart swelled with love and pride (his teacher did tell me yesterday how well he had done) and wished I could stay to see him seated in his wise old owl chair, but I had to leave.
Just now, I ordered him a pair of green dice from Amazon to reward him for being the wise old owl.  I can’t wait to see his face when he gets them!